FYI:  I’m not still in Europe… but just getting to finishing posts from that time…

Arriving in Hamburg, Germany and getting picked up in a mini-van felt a lot like climbing out of a Wonderland rabbit hole compared to the wild weekend in London I’d just left.  I went from drinking at all hours with near strangers and seldom sleeping, to regular meals, hanging out with a 3-year-old and getting re-acquainted with a real bed!  Disorienting to say the least.  And wonderful!

My dear friend and former (6 years prior!) co-worker when I worked near Stuttgart invited me to his beautiful home to stay with his even more beautiful (and new-to-me) family.  He now lives in Hamburg, which I never visited before.  That made this stop on my itinerary the only new place I would see during my 12 days bouncing around Europe! As a result, my buddy insisted on some tourist-like sight-seeing…

After I awoke from my (probably London-roofie-induced) coma the next morning (afternoon), my friend drove me and his young daughter to the city part of Hamburg.   Oooo!  As we walked over a bridge, he informed me that Hamburg has more bridges, than, say, anywhere, more than even Venice!  Woah!  So either that’s true or my friend is full of shit.  I’m not a reporter; you can fact-check yourself.  Here’s the view from that bridge:

There were lakes or rivers that look like lakes with sailboats and stuff, too (far, far in the distance, but I swear, they’re there).  I approved.  It reminded me of Chicago for being a rare place where you can sail while still being butt-up-against the heart of a huge city and its big buildings.  If it only had a beach, too, with beautiful, half-naked people playing volleyball in the sand…. AHEM.  Hint, hint, Hamburg, hint, hint.

We all had dinner at a nice restaurant/beer garden.   This is where I learned that Germany is now picking up the American trend of craft beer brewing!  “Wunderschoen!” I exclaimed within my own mind.  “This can only be amazing!”  We ordered a flight of the establishment’s own craft beers:

Never has my thumb been so inappropriately placed.  Never.  (Hey, c’mon now, get your mind out of the gutter.)  These were the worst craft beers I’ve had aside from Chicago’s own finish-less Goose Island swill.  Fuck, Germany, really?  Don’t… ugh.. don’t copy us, especially in beer.  I mean, you remember how horrible that mandatory Budweiser tasted at your World Cup games in 2006, right?  YOU’RE BETTER THAN THIS.  THIS IS YOUR THING.

The next selection made up for that, however, when I went back to an ever-faithfully lip-smacking Schneider Weisse, FTW.  Oh, yeah!  Yes.  Mm-hmm.  When given the choice, do yourself a favor, and go for what Germany truly excels at:

At least I remembered the best version of one of the most important German things I needed to indulge in: it’s what I call fat-licious yogurt.

My thumb is pointing towards “10%” which, translated into English, means, “10%”.  That’s 10 PERCENT FAT.  Mmmmm.  If you ever tried this stuff, you would take all your low-fat, no-fat, froyo horseshit -gurt and THROW IT AWAY.   This stuff will forever ruin you for yogurt.  And you won’t mind.

As far as sights to see, there was just one thing I had on my list for Hamburg.  This is where the Beatles started, you remember.  (I actually didn’t remember, my Welsh buddy’s wonderful sister reminded me.   Ahhh, serendipity.)  Lucky for me, my optical engineer friend, who is also a creative musician, knew exactly how to get me to their musical birthplace.  There’s kind of a square down the alley from where they used to play with these metal figures below, as some sort of…memorial, I guess:

Hey Germany, remember what we said about not copying ‘Murican trends?  Well, you’re pretty shit at public art memorial marker things, too. That’s ok, though, because, as I told myself, I didn’t come to see the reclaimed steel crap art in the street, I came to see the establishment they used to rock!

That thing on the right.  That was it.  We stood for a minute staring, and my friend let me soak in the moment best I could.  It was hard to imagine what it would have been like in those days, though.   For one thing, the bar wasn’t even open.  For a second thing, the place to the left of this picture had an 8-foot-tall German version of a sequin-ey RuPaul noisily hustling people into the gay club there.   In hindsight, I guess that would have made a more interesting picture.

Aside from the old Beatles haunt, it was actually pretty damn busy out — especially considering it was a Tuesday night!  Hamburg is definitely a city full of life.  Here’s a pic to illustrate — please pardon the blur:

There were amazingly cool buildings along the river — the likes of which I’ve never seen.  Here are some prime examples of the more wild ones:

And then there’s this vertigo-inducing marvel.  The arches in front of it lead to an underground bar/concert venue!

The river itself was also a spectacular spectacle with this old navy ship all aglow:

The one thing I regret not having photos of is the graffiti found everywhere.   They would have been very difficult to obtain, though, because either I or the graffiti was always moving very fast.  You can see it on the typical locations – buildings, tunnels, bridges, but you also find it frequently on train cars!  And it was all beautiful.  It was all art.  Hamburg is an artist’s city and you can even feel it in the defacement of public property!  These weren’t just tags put up by hoodlums to advertise their ego.  It was All Art.

From the Internets, I bring you: 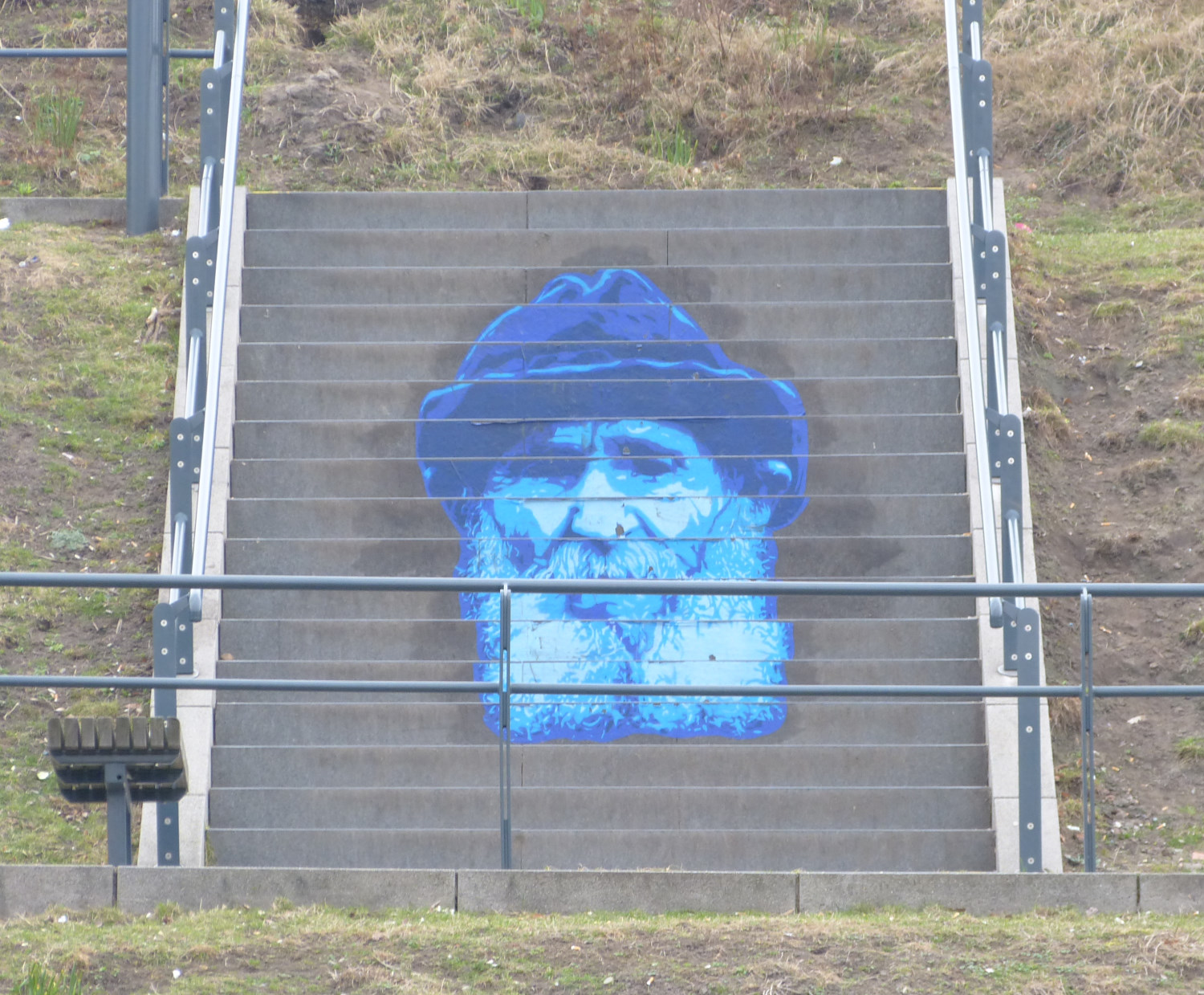 At the end of the night, we gnoshed on some Currywurst.  This time, we got the thumbs right:  an in the middle, “meh” sign.  It wasn’t bad for Currywurst; it was just that it was Currywurst… and we weren’t at the intoxication level needed to enjoy it to its fullest.

So how was my German holding up after all these years, I hear you asking?  Well, I thought it was comparably crap, and I was timid about speaking it again — most especially when in front of the 3-year-old.  I was so afraid my beschissene Deutsch would rub off on her!  It turns out, I should have been more afraid of her.  “Why?  Were her German language skills terrible?”  No, of course not, she’s 3, so that means I was envious of her skills.  The thing was… well, let me just tell the story.

One morning, while still 3/4 asleep (because I’d only just had the first real nights’ sleep in probably a good 6 days), her and I were speaking alone.  Everything was going great until a massive brain fart exploded in my head.  I was trying to come up with the past tense infinitive version of the word “essen”, to eat.   Out loud, I wondered if I meant to say, “gegessen?  Gegisst?  Ge—-isst?”, trying out to words on my ears since my brain was apparently not going to do me any favors that day.  She cocked her head up halfway from the book she was showing me, glanced at me from the corner of her eye, and lazily concealed a smirk on one side of her sweet little face while slowly saying, “ja, ge-isst”.  I tried that one aloud again and realized she had picked the most ridiculous sounding thing I’d thrown out there.   You little stinker!  Yeah, my fear was definitely ill-placed, although justified overall.

I leave you with another blessed gift as I sign off this post…  One morning, I spotted the back of this trashy Enquirer-type Hamburg magazine and it reminded me of a game the radio station 98 PXY in Rochester, N.Y. used to play in the mornings — “Florida or Germany” — or something like that.  They would read a news story synopsis and callers had to guess whether the crazy, sick, unbelievably messed-up thing happened in Florida or Germany.  It was a lot harder than you imagine…  Anyways, this paper I noticed (how could you not?) made me believe that maybe all those Germany-tagged stories happened right there in Hamburg: